Thank you so much for writing for me. So excited to see what you come up with! I hope the following is helpful from an idea-generating perspective, but please feel free to write your own thing if that's what you're most excited about.

You can also enjoy my Yuletide ramblings from years past? All still pretty accurate!

HI!  Thank you for writing for meeee!  Some things that might help you out, which you can disregard at will.

+ I have a Tumblr tag called fic I wish existed full of ideas and keymashing.
+ All my past Yuletide letters are here!
+ If you have questions about my taste, odds are annakovsky or blithers can help you out.

General Likes, Dislikes and Other Minutiae

+ THINGS I LIKE: Some things I love (obviously not all of which will be relevant to all of my requests!): Fic about women. Female friendships. Tropey or cracky fic which is committed to wholeheartedly and finds the cool or powerful or interesting angle of the crazy idea. Details. Unusual narrative styles. Fic that's wistful or funny or about something beyond just the relationship, or about the details of everyday life. I like fic about the feelings of things beginning. I like to know what the weather feels like. I like when those details can make me feel what the character is feeling.

+ POLICY RE: SEXY FIC: I AM PRO. Kink is awesome, go crazy. Very very much about dirty fic that stays in character and is creative about whatever's going down: that can mean the dialogue during sex, positions or sex acts outsie the fandom's usual norm, one character surprising the other with some kind of unguessed-at predilection...

In conclusion, so looking forward to whatever you come up with!!

What To Do When You Realize You're Really (Really) Into Your Roommate (Nick/Jess, G) - An instruction manual.

circling all round the sun (Schmidt, G) -  The day Schmidt wakes up with wings is a Saturday.

Heart Like a Socket (Nick/Jess, M) - Written for the Het Big Bang.  Verrah long.   Nick and Jess get married, get cozy, and get each other. In that order.

Your brand is: Winston! (Winston/OMC, G) - They don't know that we know that they know, or: Winston's secret boyfriend isn't so secret anymore.  Yuletide 2013.

(Ugh, LJ is being an asshat about the formatting on this -- mirrored on Tumblr where it might be more readable.)

Thanks so much for writing for me this year!  Here are some things that might be helpful which you can disregard at will!

General Likes, Dislikes and Other Minutiae

+ Some things I love (obviously not all of which will be relevant to all of my requests!): Fic about women.  Female friendships.  Tropey or cracky fic which is committed to wholeheartedly and finds the cool or powerful or interesting angle of the crazy idea.  Details.  Unusual narrative styles.  Fic that's wistful or funny or about something beyond just the relationship, or about the details of everyday life. I like fic about the feelings of things beginning. I like to know what the weather feels like.  I like when those details can make me feel what the character is feeling.

+ Totally all about dirty fic if you want to work that in there: kink is awesome, go crazy.  Very very much about dirty fic that stays in character and is creative about whatever's going down.

+ All my past Yuletide letters are here!

+ Person most qualified on this planet to answer questions wrt my fic tastes:

+ I run my mouth off way too much on Tumblr.

My actual requests, plus commentary: 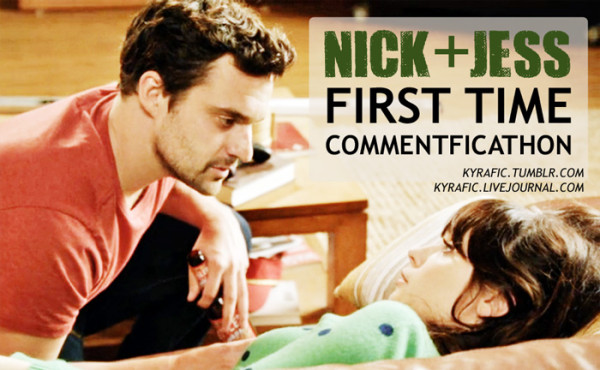 Let's Have A Three-Some Ficathon!

Is there anything better than the thrill of fic about a pairing hooking up for the first time?  All that adrenaline and discovery!  Also how are we going to make it through this last weekend 'til a new episode?

1. Write fic of any length about Nick and Jess' first time getting it on.

2. You can define what you want that to mean, on the sexytimes spectrum from just-beyond-makeouts to full-on banging.

3. Fic can be set at any point in canon through 2x22, Bachelorette Party, OR at any point in the future based on your own speculation.  It should NOT be based on spoilers for upcoming episodes.  We're doing our own thing.  (Crazy A/Us totally cool too, of course.)

4. Post it on LJ or Tumblr or AO3 before Tuesday night's new episode and link it here on Tumblr or in this entry.

5. Stay tuned to the master list of all fic.  And make it through 'til Tuesday with your sanity intact!

A few ideas to get you started, free for the taking.  Or come up with your own, obvs!

After Jess moved in, when she kept saying she could be a bro.  In Nick's childhood bedroom in Chicago.  Super awkward sex.  Fic where one of them has an unexpected kink. True American gets out of control.  Shower sex.  Nick goes down on Jess.  If Jess were really into how Nick looks in a tie.  Because they have to share a bed on a road trip. Because they're pretending to be dating at a family reunion.  Jess goes down on Nick.  On a dare.  On a bet.  Jess decides to be Katie again.  Because the Remy threesome situation got out of control.  Thanks to Nick's sexy handymanning.  Thanks to Jess' short shorts and skirts.  A game of sexual chicken.  Makeup sex.  Alone in the hot air balloon.  Julius Pepperwood takes things a little too far.  On a camping trip.  During a zombie apocalypse.  Having a threesome with Angie.  Because Jess becomes a burlesque dancer after she gets laid off and Nick finds out.  Because they think they can be friends with benefits.  Because booze.  Nick gives her sex tips during Bad in Bed and things get out of hand. Because Jess has got the dirty twirls, Schmidty.  Because he moved back in.  What he thinks when her bra comes off.  What she discovers about what he's like in bed.

Because he said "prove it".

Because she kissed him back.

Please link far and wide; more fic for all!

I guess I haven't mentioned, but like everyone else I caved and got a fannish Tumblr and have a STRONG AND BURNING NEED to discuss New Girl pretty much 24 hours a day. If you're into that kind of thing. (I-- I even have a tag.)

Oh, wait, it's not all: since I'm posting anyway: if you're not watching New Girl YOU REALLY SHOULD. It's hilarious and super pretty and hella 'shippy. [Obvs I am having a serious Nick/Jess problem, but Nick/Schmidt is my stealth OTP.]

It also has this gentleman's face. It is not a terrible face. Plus the writing is ACE (JJ "Mrs. Mose Schrute" Philbin in the houuuuse!) and it's doing all these crazy, interesting, daring things this season and I'm loving it.

And yes, I am embarrassed that this is apparently the next hill my fannish feelings have chosen to live and die on. But the heart wants what it wants, etcetera etcetera.

Yeah, so this is a thing that is happening to me hardcore.

Title: What To Do When You Realize You're Really (Really) Into Your Roommate
Story info: New Girl, Jess/Nick. An instruction manual.
Notes: Set after Tinfinity. Squeaking in under the wire to post before this gets jossed.

fearlessfan for fielding A WHOLE LOT of emails from me lately about Apt 4D.

Sorry for completely spamming y'all's friendslists today, BUT: I come with not one fic to post BUT TWO! Yes, I know, it's completely unprecedented.

annakovsky, ON THE OCCASION OF HER BIRTH. (Well, anniversary of her birth.) If you send me enough emails about New Girl babyfic, this is what happens. Warning: The only episodes of New Girl I've ever seen have been on planes! I have no idea what I'm doing, yay!

Also written for my curtainfic trope_bingo square (and/or using my wild card square as 'babyfic'... SO INDECISIVE) and the February

Guess whaaaat I signed up for

trope-bingo at Dreamwidth. Because I frigging love me a ridiculous fanfiction trope. Here's my card! W-we'll see how far I get? All the ones I really want to do aren't in line with each other at all, ha.

Oh hey, maybe now that it's LATE FEBRUARY I should do my Yuletide reveal post???

I wrote for The Left Hand of Darkness, part of the Hainish Cycle by Ursula K. Le Guin, aka possibly my favorite book series of all time. (Interestingly, it's actually one of my least favorite books in the series; not because I don't like it, but because most of the others are EVEN BETTER.)

Title: The Right Hand of Light
Fandom: The Left Hand of Darkness (Hainish Cycle)
Details: Genly Ai/Therem Harth. What Genly did not tell.
Notes: Written for

care_says for help brainstorming! And many boundless thanks to Ursula K. Le Guin, for creating these worlds, for talking frankly about feminism and things she'd change in her own books, and for the interview which gave me the image of Estraven with his children.

What you need to know if you've never read the book: Genly's a human ambassador on a world where everyone is genderless except for a period once a month when they go into kemmer (think pon farr or heat: a Must Have Sex situation) and can become either male or female.